Reposting my 2014 Review – check out the links at the bottom of this post for details on how to WIN tickets to Santa’s Village for use during the 2015 Season!

We are very lucky to have access to a family Cottage near Muskoka, which allows us take a vacation on a beautiful lake with minimal expenses. We have been going for years, but had never been to Santa’s Village. Thanks to a WIN from a contest run by “Help, We’ve Got Kids: Toronto” we received a Family Four Pass to use any day this Summer!

This Summer has had a lot of cool days, so we decided on one of those days in July when it was not exactly swimming weather, it would be the perfect day to keep the kids occupied at Santa’s Village!

Right away we were greeted by a giant bear!  The kids posed for a quick picture! 🙂 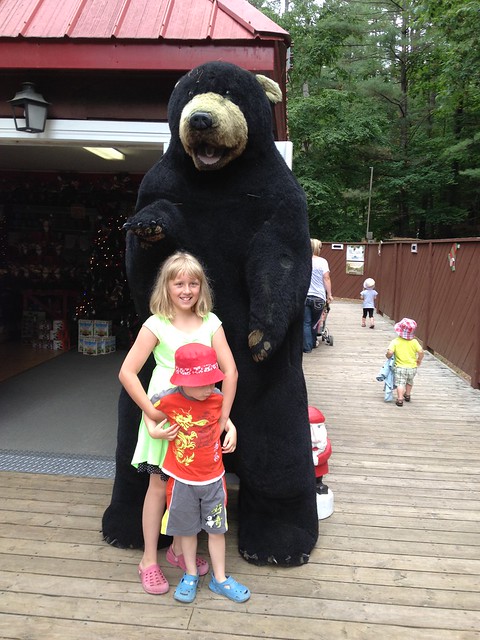 Then we headed up the path and my daughter HAD to get her face painted (I was concerned about the picture with Santa, so I insisted on a ‘cheek paint’ only). The face paint artist created exactly the symbol my daughter requested! 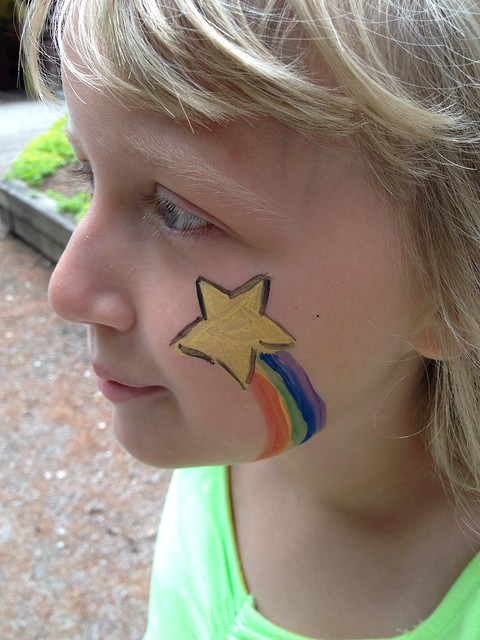 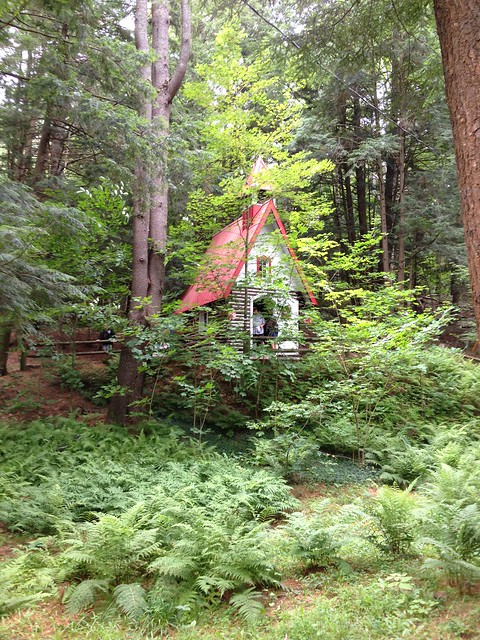 We arrived just as RONNO was performing (every Summer, Santa’s Village attracts some of the most talented children’s performers in Canada). Everybody was dancing (and I got to remember when my 10 year old was little and I’d take her to see Ronno at the Kitchener Market’s Kids Hop). 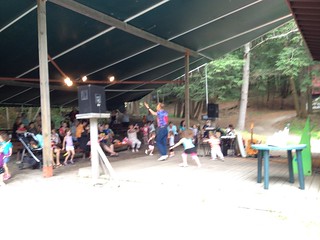 NOTE: Any children left unattended will be put to work as Elves! 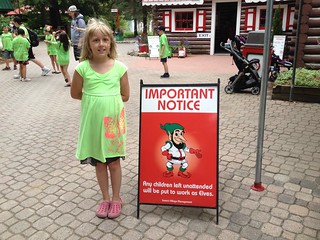 We found SANTA – the kids posed with Santa for what will have to be our Christmas card this year! My son loved Santa’s BEARD! 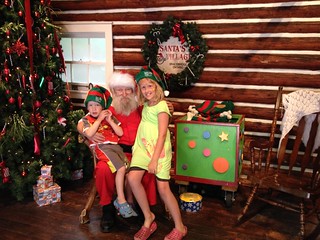 Now that the kids met Santa, they were ELVES. There is nothing more adorable than watching your two little elves running around all day, playing and smiling at Santa’s Village.  They loved feeding Santa’s reindeer. 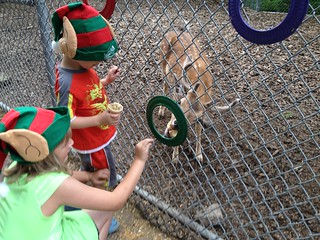 They have carnival games that are FANTASTIC. For one low price, your child can play until they win – a prize is guaranteed and it is no ‘booby prize’ – it is a full size, choose whatever you like prize! 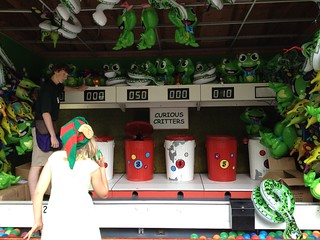 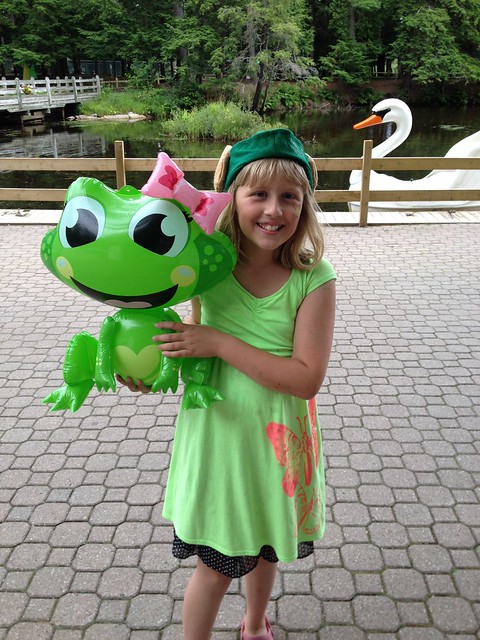 The RIDES!  My kids are 10 and 4. My 10 year old daughter is terrified of roller coasters (they have one at Santa’s Village, but there was no way she was going to go on it). My 4 year old son has autism and is pretty good about going on rides, but we worry about losing him and don’t always know what he ‘wants’. At Santa’s Village, there were lots of opportunities for my son to climb and slide and burn up any energy he had. The park is big enough, but not so big that we ever worried about losing him. He let us know quite clearly what rides he wanted to go on, and after one turn on the carousel with his sister, he was able to go on and off the ride independently. 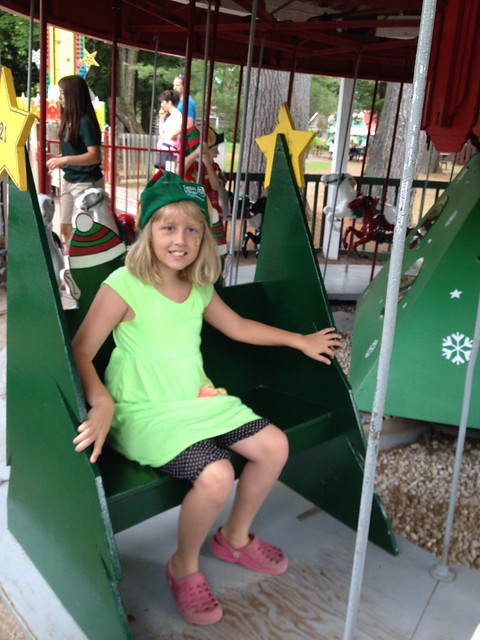 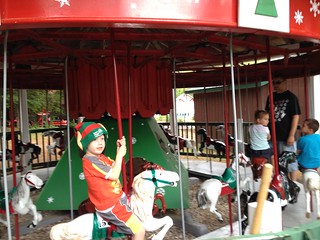 We took a ride on Santa’s Summer Sleigh (a river cruise) – it was so much fun! Beautiful waterway. Fun music played like the Gilligan’s Island Theme Song. 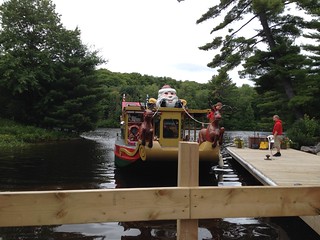 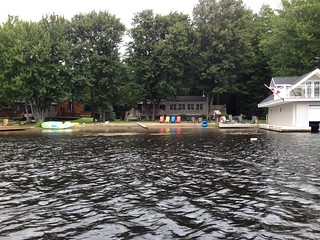 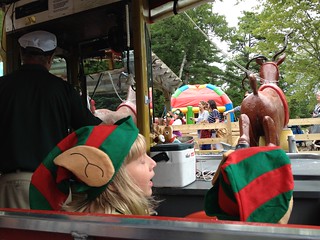 We also went for a ride on the Train. 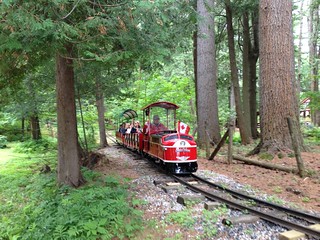 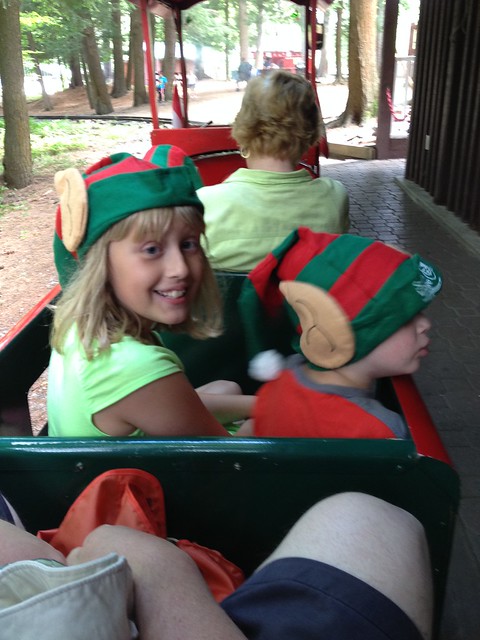 Santa often comes out to watch the children on the rides! He waves at them and jingles his jingle bells, sometimes he gets on and goes for a ride, too! 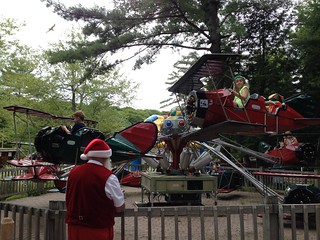 They have a JUMPING star ride, that looks a lot scarier than it is. The motion is much more of a gentle bounce and not a feeling of plummeting.  My TIMID 10 year old decided to get brave and try it after watching her brother and I survive and laugh a lot!  Great memories! 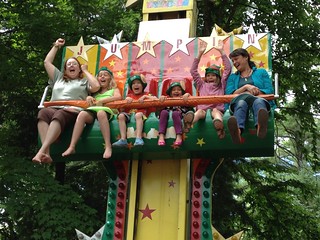 When my son saw the Ferris Wheel, he had to go on it immediately!  You sit in a big Christmas ornament and enjoy the beautiful wooded views! 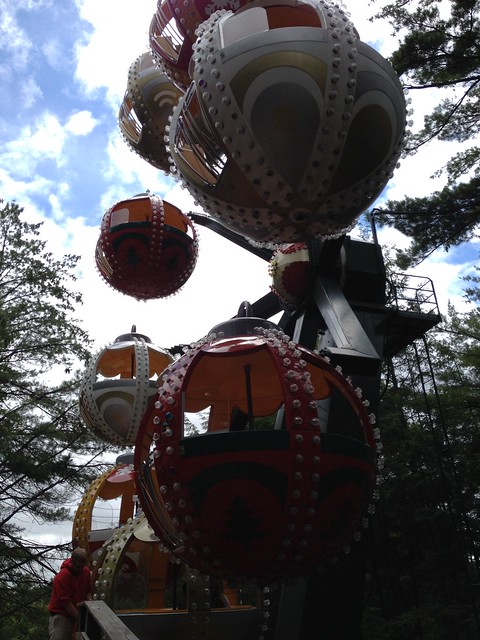 I sent my family onto a paddle boat swan while I took pictures!  I love these swans! 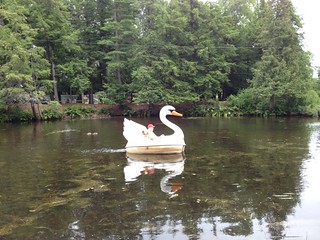 We followed the signs to Elves Island, where the kids bounced, climbed, coloured and went down slides. So much fun, and definitely helped them burn energy on a day when we’d have been hearing lots of “I’m BORED” from my daugher at the cottage! 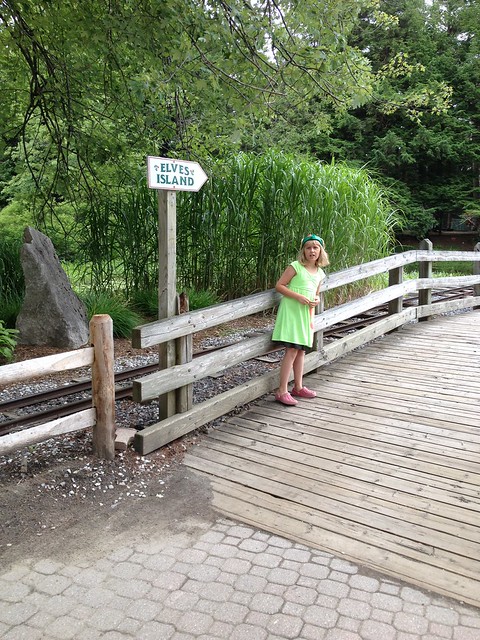 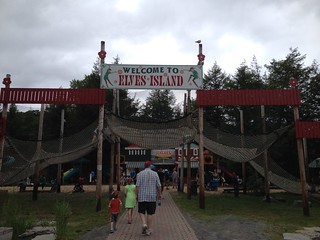 The Staff were so friendly!  The operator of the Ferris Wheel offered to take a picture of my son and I. 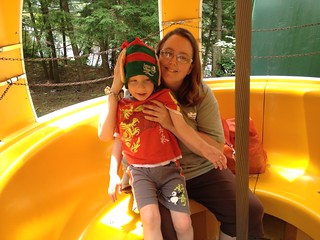 Santa’s Village is so CLEAN! It seemed like every 20 minutes we were passed yet again by the two teen girls on garbage duty – they always had a friendly smile and greeting, and they were constantly keeping the park pristine! I was very impressed!

The kids were hungry and tired of all of the healthy eating we were doing at the cottage. Luckily, Santa’s Village has Pizza Pizza!  We enjoyed a family meal deal (a large pizza, 2 pops and 2 juice boxes)! The pizza was so huge we couldn’t eat it all. 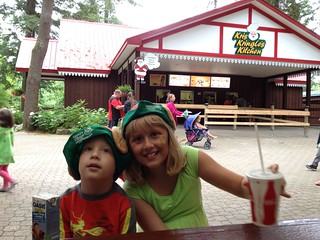 Later my daughter decorated a Gingerbread Man at Mrs. Claus’ Bake Shop and I enjoyed COMPLIMENTARY COFFEE!  This is not a park where you leave feeling overcharged and used – they treat you like family and give everyone the best experience! 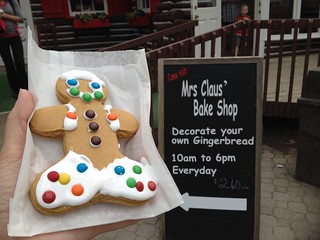 We will definitely be returning again!  Perhaps this month (in August 2014, there’s 2-for-1 admission every Friday and Monday). Thank you so much to “Help, We’ve Got Kids: Toronto” and to Santa’s Village! When they heard we were headed to the Muskoka area, they offered to hold our prize win at the front gates rather than make us wait for it to arrive in the mail.  That kind of exceptional customer service was evident the entire day! 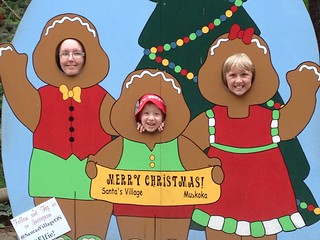 Updates!  We returned again in August. During August, Santa’s Village offered 1/2 price admission (or Buy One Get One) ticketing on certain days.  We headed out on a cloudy, overcast ‘iffy’ day.  We had a great time, but it did rain – not enough to shut everything down, but enough to get the kids wet.  Later, we went to see Erick Traplin perform (a local Kitchener-Waterloo legend) and the skies opened – it poured and poured for over an hour (but we were nice and dry in the covered theatre enjoying the show)…  But don’t worry! Santa’s Village has a rainy day policy and our entire family received a ‘rain check’ so we can visit again in the following season!  We will definitely be returning in 2015!

Want to win a family pass?

Stay tuned! Adventures with Jennpup is excited to be hosting a giveaway in July 2015!